We wrote that this issue wasn't settled in Wilton Rancheria and City of Elk Grove Celebrate CASINO Prematurely. The Issue is NOT Settled at ALL  and about possible subterfuge here  Also, Stand Up For California sued them here 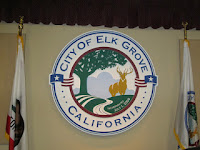 The filing says,  the BIA trampled "public notice and participation requirements in the process, to prevent the incoming Administration from reviewing the underlying merits of the application or the extraordinary deficiencies in the process."
The argument states "every step of the review process was without precedent and without support in the law or the regulations governing NEPA, the fee-to-trust-process, and the Administrative Procedure Act (APA)."
At the heart of the argument, plaintiffs claim that the Wilton Rancheria and BIA officials engaged in a bait and switch maneuver. They assert that while the original site in Galt had a required public scoping meeting, none such were conducted for the benefit of Elk Grove residents.

Of interest, the filing also provides a history of the Wilton Rancheria noting that as part of the California Rancheria Act of 1958, California Rancheria would be disbanded by a popular vote of members. In return, members were given proportional shares of land and certain improvements.
By September 2006 however, a group identify themselves as the Wilton Rancheria submitted a development agreement with the National Indian Gaming Commission for approval. According to the filing, a group called East West Gaming was to provide the "group financing to obtain federal recognition and start development of a gaming operation."
Eight months later the same group sued the U.S. Department of Interior seeking restoration as a recognized tribe claiming the government had failed to "provide certain improvements to roads, water and sewers." In a stipulated agreement, the group's status as a tribe was restored and the former land was placed back into federal trust.