Native American Justice Warrior, Attorney Gabriel Galanda gets to the heart of the Bureau of Indian Affairs recent decision to end issuance of CDIB.  The BIA has made some EGREGIOUS mistakes on INDIAN BLOOD

As Gabe mentioned on his twitter: "I have no doubt that if the BIA carries out its proposed plan to cease issuing CDIBs, many more Indians will be disenrolled and internecine warfare will destroy many more tribal communities."


First, we never defined ourselves according to blood degree until the U.S. foisted that racial formation/fiction upon in the late 1800s and most notably via the IRA in 1934. The BIA should not get it twisted in suggesting that the acts of defining Indian blood or issuing certificates of any kind were traditionally any aspect of tribal sovereignty.

Although some tribes have “638’d” the issuance of CDIBs, as the letter alludes, if a practice wasn’t indigenous to us, it’s disingenuous to dub it an act of “self-determination” today. It is instead an act of delegated federal/colonial power. Disenrollment is another example of this dynamic. OP: Disenrollment is the stripping of tribal citizenship practiced by many casino tribes (Pala, Pechanga, Redding, Nooksack)

Second, as Paul Spruhan has explained in his seminal scholarship on CDIBs, the BIA has been issuing CDIBs since the 1930s, albeit without any Congressional authority to do so. Rising indigenous activist Emilio Reyes has uncovered the BIA’s current CDIB “policy.” READ FULL ARTICLE HERE 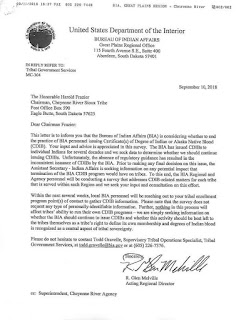 Posted by OPechanga at 3:48 PM

It might be a violation of federal law to discontinue CDIB. The IRA defines Indians as those under federal jurisdiction in 1934, their descendants, and all persons of one half or more Indian blood. Is the BIA going to accept tribal blood degree determinations for participation in federal programs and services?

If so the first thing my tribe will do is adjust everyone to half blood. Let's see what those incompetent morons at the BIA do then.