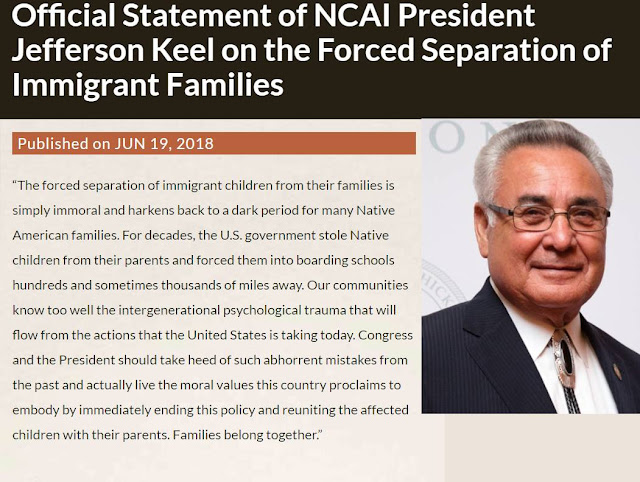 Jefferson Keel, President of the National Congress of American Indians, a group which has STUDIOUSLY avoided the horrible civil and human rights abuses of many of his member tribes. Including  Pechanga, Hopland, Pala, Chukchansi, Redding Rancheria,  which we have noted many times, including this article by Dr. David Wilkins, should be congratulated for coming out against the human rights abuses of America.

At the same time, we encourage Mr. Keel, to LOOK WITHIN, and speak out for those that have had their tribal citizenship STRIPPED, their elders abused and the apartheid and segregation on many tribal reservation under his sphere of influence.

Get YOUR MEMBERS to live the moral values our nations proclaim to embody, Mr. Keel, and erase the MORAL STAIN of Tribal Disenrollment

Posted by OPechanga at 1:20 PM

He won't do shit for the Indians being abused by the corrupt leaders of these Tribes because he and others like him will lose to much money being donated by the Outlaw leaders to keep them silent on certain issues.

He looks like the Honorable Ernie Lawson, Chairman of San Pasqual Band.