Almost a year after being called out for "abuses of power," the Nooksack Tribe has won recognition of its leadership amid a long-running disenrollment dispute. 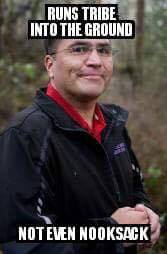 The Trump administration on Friday affirmed the results of a recent election in which voters filled four vacant seats on the council. The move marks the first time since 2016 that the tribe, based in Washington, has had a valid governing body.

"The Nooksack people have spoken and we look forward to continuing our responsibility to serve our people," Chairman Bob Kelly said in a news release after the tribe received word from the Bureau of Indian Affairs.

Read the full story at INDIANZ.COM
Despite the win, the drama is far from over. Voters were supposed to go to the polls later this week to fill four other seats -- including Kelly's -- but some citizens, many of whom have clashed with the chairman, aren't sure when the election is actually going to happen.

And on the same day of the BIA's action, a federal appeals court was taking a different view of Kelly's reign. At a hearing in Seattle, a judge recited a litany of alleged abuses, including the removal of hundreds of people from the rolls, the firing of a tribal judge who had ruled against the chairman and the eviction of elders from their homes.

"That's a record a tin-pot dictator of a banana republic might be proud of," said Richard R. Clifton of the 9th Circuit Court of Appeals as he described some of the allegations in the dispute as "really remarkable."

The tribe now appears to be back on track even if the upcoming election remains in doubt. Kelly acknowledged that it has been "suspended" and no new dates have been announced, either for the primary, which didn't take place last month as planned, or the general, which was to take place this Saturday.

The BIA also acknowledged the delay but said it would continue to recognize Kelly and the remaining members of the council as legitimate "until the results for the general election originally scheduled for March 17, 2018, can be certified."


"I look forward to working with the Nooksack Tribe in the future," John Tahsuda, who serves as the Principal Deputy Assistant Secretary for Indian Affairs at the agency, wrote in the letter on Friday.
Posted by OPechanga at 1:23 PM