Another FAUXAHONTAS: Conservative Ellie Reynolds has NO Membership in Tribe

Just like liberal Senator Elizabeth Warren was outed as a FAKE CHEROKEE, NOW THIS.
Conservative blogger Ellie Reynolds claims to be Oglala Lakota. She has appeared several times onFox News Insider, leaning on her alleged heritage to speak in favor of Native American mascots.
But on Thursday, the Oglala Lakota government in Pine Ridge, South Dakota rejected her claim that she is a citizen of their nation. 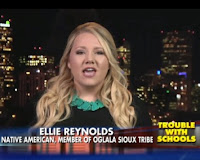 Kevin Steele, a spokesman for the Oglala Lakota, toldICTMNthat their enrollment office had investigated Reynold’s claim and said she is not on record as having any lineage to their people.
"I believe it's a fraud," Steele said about Reynolds. He said she cannot claim to be Oglala Lakota because "she has to be enrolled" in order to do so.
Reynolds, who refers to herself onTwitter as a “Native American advocate” is, by profession, a tracker for the Republican Party in Colorado, State House Representative Joe Salazar told ICTMN.
Salazar said Reynolds is paid by the GOP to follow him and other Democrats in the state and to record their comments at committees and town hall meetings.
On her website, Reynolds claims she is “an Oglala Sioux Native American” whose passion is about “giving a voice to Native American conservatives.”
In March, Reynolds was present at the Colorado State Capitol to hear Salazar’s anti-Native American mascot legislation. The bill would have regulated the use of Indian mascots at schools throughout the state. She had told Salazar she would testify against the bill, but remained silent throughout the hearing. The Indian mascot bill passed the House, but later died in the Senate.
For the record, Steele said, the Oglala Lakota have always been opposed to the name of the Washington football team as well as any and all Native American mascots.
Posted by OPechanga at 7:31 PM

Well she looks white, so I can see how she'd be mistaken for a casino Indian.