UPDATE: This VIOLENT criminal is still at large and last seen in the vicinity of the Pechanga Casino. Please be careful! He's dangerous to anyone who's within gun range.
ARMED and DANGEROUS Be on the LOOKOUT 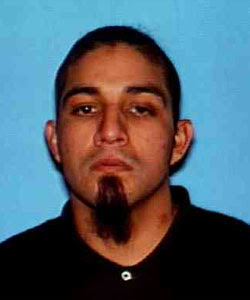 The Masiel Crime Family strikes AGAIN! A man who is getting some $360,000 a year still has the need to carjack at gunpoint. He ran to the rez for protection apparently. It looks like the Pechanga reservation is unsafe territory. This violent offender is the grandson of the woman who helped destroy 25% of the tribe, while she was on the enrollment committee.

Inland Empire News Blog has the story first. Press Enterprise Later
Details: On September 3, 2008, at about 1930 hours, deputies from the Riverside County Sheriff’s Department responded to the 45000 block of Pechanga Parkway in reference to a reported carjacking. This is the Casino area.

The victim reported that 26 year old Benjamin Masiel , a violent offender of the Temecula area carjacked the victim’s vehicle at gunpoint following a domestic dispute. The suspect fled the area in an unknown direction. Riverside County court records show Masiel has multiple felony convictions, including assault with a deadly weapon, criminal threats and domestic violence. HOW many strikes does this guy get.

A search for the suspect was unsuccessful. That means he's OUT THERE, with a gun!

On September 4, 2008, at about 1200 hours, Pechanga Tribal Rangers located the victim’s abandoned vehicle on a dirt road on the Pechanga Indian Reservation and notified the Riverside County Sheriff’s Department. Deputies responded to the area and recovered vehicle.

The suspect is considered armed and dangerous and is still outstanding. The Pechanga Casino area could be a dangerous proposition for customers.
Posted by OPechanga at 10:56 AM

Ya, you talk about Soboba being dangerous and this guy has a long record too!

Violence is not only at Soboba. This guys a beater too.

I am not suprised at all it is only a matter of time when the connecton to other people and groups is made and, well you will all see.

Is the Pechanga Tribal Rangers going to have to carry weapons now?

Are they capable of protecting the visitors to the casino?

What are they doing to keep us safe from car thieves and violent tribal members?

An example of the "goons" who sat at the back of the room during Pechanga tribal membership meetings.

Tribal members, is this who you would rather have in the tribe instead of us, the disenrolled?

Any coincidence that this guy from the Masiel/Basquez family is related to some of the people at Soboba.

It wouldn't surprise me in the least that those few lawless people from Soboba are related to the lawless at Pechanga.

There are plenty of fine people both at Soboba and Pechanga so why let a few "goons" ruin it for everyone?

Is it true that Mark dosnt live on the reservation because he fears for his life there. I could see the fear growing in his face towards the end of our membership, he would run out of meetings and wouldn't hang around. I imagion it has gotten worse since those times.

But in all fairness I believe he did it to get away, not for economic gain. It's still messed up though.

dosent look like an indian to me, looks like a typical mexican trying to pose as an indian! Thats why us moratorium people are still waiting!

Wake up white people!!!!
Pechanga is a war zone!!
Stay away if you want to stay safe!!
Look at the bad as-!
Runs to the rez!
Punk As_! tribal member running from the law.
Punk As_! tribe sheltering him from the LAW!!
Is anyone safe on tribal land,think about it, PEOPLE!!
Pechanga only cares about a FEW special ONES!!!!!!!!!!!!

What ever reason, it is still wrong. Look at his rap sheet with the link on his name.

What does he put on his job resume? I smoke pot and F@#%* women for a living.

This type of lawlessness is not the first remember when the club at Pehchanga was shut down because of the illegual activite, and remember how the tribe glossed it over. Just goes to show you that the stink of the pile carries a long way no mater how far you burry it

There is all ways a few bad apples from everywhere. I understand that the ones who have been disenrolled for whatever the reason may be have it out for the tribe, but honestly you guys are acting like children. I can pick any town or rez in California & find some one who has commited a violent crime. Does that mean all Californians are horrible people. If so that includes you too.

What needs to done is get rid of every tribal member I meen everyone from the top dog to the scum that is hiding from the law! Enroll everyone on the moratorium,and disenrolled start all over! get rid of the trash they have now! Nothing but welfare mexican freeloading fat pigs! Quit depending on something that isnt rightfully yours! Go find a real job!

This GUY IS A BAD APPLE. He did'nt fall to far from the family tree, did he? Take a look at Grandma Masiel, she is another bad apple in that family, susprised anyone? He could be hiding out on the Rez. What is that thing on his chin???

It's a speed bump so he does not get carpet burns

So this is what Andrew Masiel looked like as a young man.
What a strong family resemblance
the billy goat look.

IS IT SAFE to go to Pechanga? Why should I take my family there?

I recommend to stay away from that Casino until the Tribe admits to the human and civil rights violations that have occured over the past few years and, until they re-admit everyone that has been disenrolled and put into a moratorium.
BOYCOTT IS THE BEST PUNISHMENT.

"get rid of the trash they have now! Nothing but welfare mexican freeloading fat pigs! Quit depending on something that isnt rightfully yours! Go find a real job!"

Wow! What a responsible forum you are running here, John. As a proudly enrolled member of Pechanga whom supported your family's re-enrollment efforts, I have lost all respect for your plight. With comments like the one posted above, why would I even think twice about reversing the "injustice".

All communities have their bad apples, don't judge me on someone else's actions...the epitome of raciscm. You have done nothing more than lower yourself to the level of all indian haters. Funny considering you are indians. Or are you?

What a dumb statement>>(what a responsible forum)...what should they do...censor all the replies?..
and why blame the disenrolled people for this comment that he is quoting??...there are many non-indians that actually feel this way about the tribes...and in America, people are supposed to be allowed to express an opinion!..Unlike the Pechanga tribe that just violates its members rights without a forum.
They just can't admit it has nothing whatsoever to do about blood-lines and EVERYTHING to do with the almighty dollar...what a bunch of phonies!!!!
(proudly white--non indian , non-tribal, but interested in human rights!!)

To Anonymous tribal member, so because one person writes something offensive to you, we are all blamed for what this person said?

Don't you think it is possible that there are people here who may not agree with this person's statement?

I agree with what another poster said in that the moderater should not censor any posts with the exception of profanity laced comments or threats of violence to other posters here.

Finally, regardless of what this offensive poster said, there still has been injustice done to your fellow tribal members and that should be what you go by.

I admit I said some things I shouldnt have said, I am sorry, forgive me,But when youve been waiting in a moratorium for twelve years, how would you feel about now?Its very frustraing having to wait for someone to go thru an application to find out if you are who you claim to be It takes a toll on you. So once again,I am truly sorry for saying those stupid things.

Anonymous frustrated poster: It is understandable that you feel the way you feel but for the tribal member to now say he or she doesn't want to help any of us because of one comment made out of your frustration, that is unfair.

To the person I offended, Please dont take it out on everyone for what said,I was very depresed at the time. I hope you can find it in your heart to forgive me.

Have they caught this violent dog yet?

How is that "stay away from Pechanga" moratorium working out for you people?

is this guy in jail or did he pay his way out---i never go to pechanga to play--not safe and i have seen the rangers in action talk about not being safe---i wouldn't turn my back on any of that bunch. find anyone who has had experiences working for pechanga and you will hear some scary stories. it will all come back anyone who knows indian tradition knows this.

I’m learning new things in bundles as there happens to be a lot of unique stuff here. I hope it will continue to deliver nice information.Japan Used Car Sale
Online Auto Auction

My family SUV was stolen last night from the Valet line last night. Wondering what can be done.