Dear LeBron James, Stand up Against Civil Rights Violations By YOUR SPONSOR The Pechanga Band of Luiseno Indians 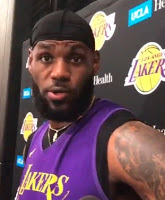 We know you have been outspoken about civil rights issues in the Black Lives Matter v. Police issue as well as voting issues in Georgia .  We ask that you stand up for over 11,000 LIVING Native Americans who have had their civil and human rights violated by tribal disenrollment.

We ask that you publicly rebuke one of the Laker's sponsors,  the Pechanga Band of Luiseno Indians  and ask your media partners to investigate the issues detailed below to determine whether sponsorship from tribal gaming is in the best interests of  the King James brand, and that of the Lakers

The recent protests over police violence against African Americans have made many organizations put Black Lives Matter on the front burner. As a sports organization that values diversity, OP asks: would the Los Angeles Lakers support BLM against the ravages of APARTHEID?  We think you and the team would, and rightly so. Discrimination in all its forms are abhorrent. The Pechanga tribal leader Mark Macarro, practices apartheid and segregation on the reservation, you have practiced at in Temecula CA

It follows then that the Lakers and the NBA would give the same regard to Native Americans who live under apartheid systems and would not hesitate to support Native Americans suffering from discrimination. Now OP provides the Lakers organization the opportunity to make a difference, and help right the wrongs on the reservation of your sponsor, the Pechanga Band of Luiseno Indians in Temecula.

Throughout Indian Country, thousands of native Americans have had their cultural heritage stripped from them, primarily by gaming tribes. The Lakers' sponsor, the Pechanga Band of Luiseno Indians, of Temecula CA, is one of the most egregious civil rights violators in Indian Country.  Stand up against the tribes abuse of their elders and children would set a lot of things into motion.

The Los Angeles Times, LA Weekly and KNBC and KCBS News have done numerous stories detailing the activities of the tribe, including “Tribal Flush: Pechanga People Disenrolled En Masse.” and “Without a Tribe” reported by Colleen Williams of KNBC. A detailed report by Cristy Fajardo also enlightened many

- The Pechanga Band has eliminated 25% of its citizenship and denied them due process as well as equal protection under tribal and federal laws, in direct violation of the Indian Civil Rights Act.

- The Tribe stripped elders of their health care benefits and access to the tribal medical clinic.

- The Tribe forcibly removed the children of members from the tribal school.

- The most recent disenrollment of 100+ adults and children was especially heinous as the Tribe's governing body had passed a law to repeal disenrollment procedures and make it illegal for the Enrollment Committee to remove members without consensus. Tribal leaders acted in disregard of this law and proceeded to strip members of their citizenship without just cause.

These leaders knowingly violated their own Constitution and the ICRA. Pechanga tribal officials breached their oaths of office, then claimed these illegal actions were protected by sovereign immunity. Sovereignty gives tribes the right of self-determination, but cannot be allowed to justify discrimination or the disregard of inalienable civil rights.

Sports betting is big business, but professional teams must be free of the taint of gambling corruption. Who can trust the results of games when a team accepts sponsorship from a gaming Tribe that deliberately cheated members out of their rightful heritage?

We ask that you publicly sever your ties to the Pechanga Tribe and investigate the issues detailed above to determine whether sponsorship from tribal gaming is in the best interests of  the NBA, the Lakers and the LeBron James brand.

Posted by OPechanga at 8:34 PM