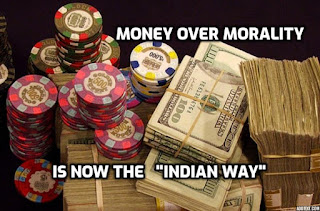 For over 14 years, we've written on the explosion of tribal disenrollments in casino Indian Country.  Tribes sing the same chorus, learned at disenrollment seminars about "correcting the membership rolls" when in fact, it's about usurping power, stealing per capita shares of casino profits and settling old scores in family disputes.

THEFT of per capita via tribal disenrollment is NOW OVER ONE BILLION DOLLARS.  Yes, it's about the money for casino tribes.

Gone are the days when tribal members worked together for the good of all. At Pechanga, my tribe, the same people that begged my cousin for money, diapers and food, disenrolled him decades later.

Tribes choose per capita MONEY, reducing the pie slices of per capita shares, over the MORALITY of taking care of the elders, the children whom they cast off into the care of the state.  One has to wonder if the tribes are still using the disenrolled in their census roll numbers to the federal government to keep federal dollars coming their way.  If the tribes cheat their own people, surely cheating the government is no issue.

Does morality matter anymore?   We see the choosing of the almighty dollar over doing the right thing just this week, in the public apology of former wrestler JOHN CENA  apologizing to China for calling the country of Taiwan, a country.  WHY?  They can't afford to lose Chinese ticket sales at the box office  So they choose million of dollars over million of Taiwanese people

Many accuse me of only being in it for the money, but you can contrast and compare easily.  Of the three major Pechanga websites, my Original Pechanga Blog, Pechanga's casino website, and the asshole Victor Rocha's Pechanga dot net site, which of the three has never run ads for protit?   Yep, this site.   I've been asked, "why don't you run ads, your traffic is high enough?"   Well, I'm here to help share information, not make money from it.  The other Pechanga sites can't say the same.   Money over Morality.

Read more on tribal per capita and disenrollment for dollars

The Moral Dance Between The Pechanga Tribe,The City of Temecula & The Media

Tribal Membership Revocations: Disenrolling For Dollars? It's about the $$, NOT Membership

Posted by OPechanga at 8:23 AM

Email ThisBlogThis!Share to TwitterShare to FacebookShare to Pinterest
Labels: per capita