INTIMIDATION and STALKING of NATIVE AMERICAN Women at NOOKSACK Tribe, By the POLICE CHIEF? 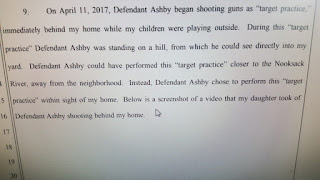 Hey, let me do a little target practice around your house. Rather than a firing range like all responsible gun owners.   The NRA would want you to be responsible, the Nooksack Tribe, apparently is okay with shooting guns around homes, as long as it's the home of someone suing their police.


On her Facebook page, Carmen Tageant has a picture of Ashby tailgating her for SEVEN MILES, this attempt at intimidation is STAGGERING.  But with the Nooksack Tribe exterminating 306 of their own people, can we expect any action on their part?  WHY are you laughing?

Tageant alleges that Ashby, formerly a police officer with the Ferndale Police Department, physically assaulted and battered her in Deming as she attempted to file for reelection to the council a few months ago. “As Ms. Tageant approached the front door of the Elections Board Office, defendant Ashby saw her, with application materials in hand, and locked the front door,” court documents state
According to the documents, Tageant then knocked on the door, and Ashby let her in. She said she was there to file for reelection, and then election superintendent Katrice Rodriguez told her she was too late for that. Then, Tageant alleges, Ashby forcefully grabbed her arms and pushed her back.She protested and evaded him and left the building.In this era of #MMIWG  Missing and Murdered Indigenous Women  and Girls we hope that Nooksack Police Chief Ashby won't be contributing to the number and his threatening actions point to.

Posted by OPechanga at 7:03 AM

Does the US have legal jurisdiction on reservations? i.e. would it be like us investigating on Canadian soil if we came in and told the sheriff he was a criminal?