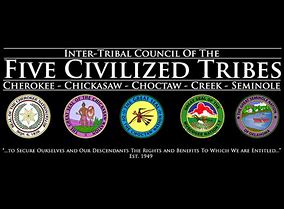 Descendants of Freedmen of the Five Civilized Tribes (Cherokee, Creek, Choctaw, Seminole and Chickasaw) and their supporters will demonstrate outside the Muskogee Bureau of Indian Affairs (BIA) building at 3 p.m. Friday. The building address is 3100 W. Peak Blvd.

The focus of the demonstration is to highlight BIA refusal to enforce 1866 treaty rights of Creek Freedmen by litigating on behalf of the freedmen in federal court. The BIA has a legal responsibility to protect the rights of individual tribal members and descendants of tribal members protected by treaties between their tribe and the U.S. government.
Creek freedmen descendants' ancestors were enslaved by tribal law solely due to their race prior to the Civil War but were granted citizenship in the tribe in 1866 by treaty agreements between the U.S. government and the tribes. The freedmen after the Civil War were registered as tribal members by the U.S. government Dawes Commission approximately 110 years ago when tribal lands owned in common by all tribal members were divided into individual allotments. In prior years, Freedmen not only voted but held tribal political offices and served as tribal judges.