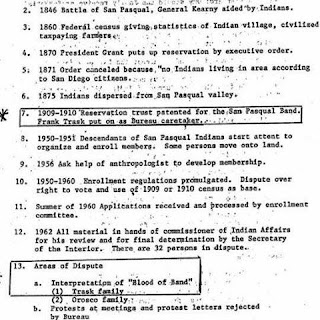 The injustices to the San Pasqual Kumeyaay Native people started in 1909, when the BIA would not accept the 1909 Census until 1910 when Frank Trask, a white man,  was put on the San Pasqual Reserve as Caretaker.

Lawsuits are underway to ensure every single Trask Family Member is  removed from the Rolls. This fight has been going on 90 YEARS before the Casino was open in 2001.

This enrollment issue at San Pasqual the disenrollment is a lot different today than what over 11,000 natives are facing today in tribes like Pechanga, Pala and Chukchansi to name just a few.  San Pasqual has enrollment problems today, because   Frank Trask family descendants continue the injustices of trying to change our laws to their benefit today by keeping the rolls closed by an illegal Moratorium..

READ MORE on San Pasqual history at these links:

Posted by OPechanga at 2:14 PM