Sad News from the Pala Reservation.

King Freeman was a leader.  He worked to right the injustice of disenrollment at Pala over over 150 members, one he claimed was a personal dispute erupting into collateral damage at the hands of the current chairman of Pala, the porcine Robert Smith.  He was the owner of the PALA store for decades. 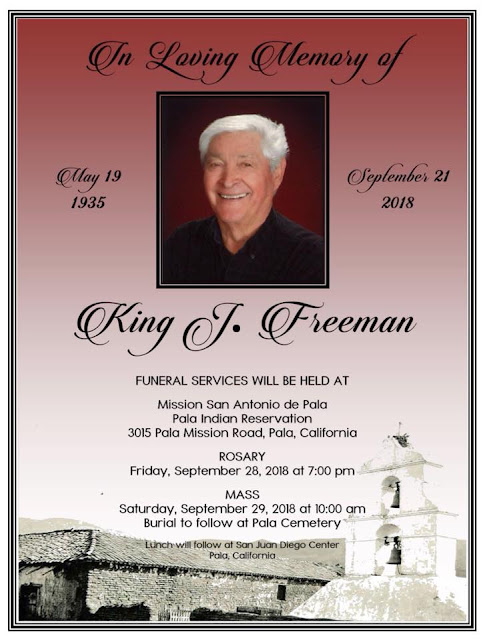 Our condolences to his family, his tribe and the many people he touched in his long life..... Learn more here from King Freeman's OWN WORDS
Posted by OPechanga at 2:52 PM

King was a true Warrior. A respected Elder. Sadly, not many like him left, Pala will never ever be close to the same. They have lost a great man, a great warrior. Thank you King for everything, you always treated everyone with kindness, so many people. In life you are honored, in death you are revered, May many young Pala men look to you as a hero, a fighter for your people, and be brave like you were to stand for their own people and for what is right.

May King rest in peace. He was a kind man and a true warrior.

Who will follow the lead of King Freeman? Who will take up the fight? Who from Pala will be the opposition leader now?

His Magesty protester, King warrior, rest in peace brother you are with us in our native and political struggles. And we know as our sister reservation Pala~ She will Raise "Yet another King warrior for the people who in these times need Justice and equality and fair rights. which this King may
he be already in the making"..who is worthy?... He who is born under the taurus star whose passion is Numbers.And whose voice can be heard thru the mountains of the 78 routes..
So be it. @men

AGAIN THE WRONG PERSON DIES IN PALA.
WHEN IS ROBERT SMITH GIONG TO DIE?. NEXT I PRAY.

I am surprised that no one has beat Robert Smith or Theresa Nieto to death for what they are doing to the Pala Reservation.
They are totally trashing all the Customs and Traditions of the Pala Tribe.
For what reason, no one seems to know.
They totally disrespect the Elders of the Tribe as much as possible or when ever someone that they have a hard-on for wants something they make them feel that they owe the EC for what, who knows.
They have taken away homes health care and per capita from their own people and on top of that they disenrolled over 150 members that without any doubt belong on the Tribal roles with proof from way back in the early 1800'S.
I hope the people in Pala wake up and smell the coffee on the next election which is in November of this year.
They need to find a way for someone to run the election like the BIA or the FBI to insure that things are done according to the way it should be, other wise the same shit will continue on until someone gets fed up and take Smith and Nieto out, and I don't mean to dinner and a movie.

Their time is almost here and then we can start to heal.
Robert Smith will soon be known as Prisoner #???????????.
have fun picking up the soap in the shower because Big Buba will be behind you helping.
Once they are arrested they will have to stay in jail until the trial is over with because there is a no bail clause when you are arrested and are locked up in Federal jail on the crimes that they will be charged with.
Smith would not be able to handle being locked up in a small cell with another 2 or 3 other Prisoners.
He would probably kill himself.
Nieto on the other hand would probably enjoy it being locked with 2 or 3 other Prisoners because even the woman in Federal Prison are more of a man than her husband is.
Got to get ready for work will check back later.