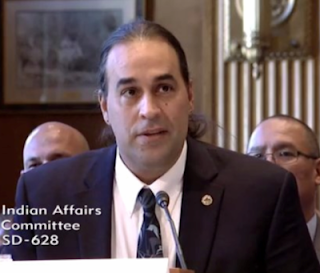 It is our policy not to discuss DOI personnel matters in the press,” BIA spokeswoman Nedra Darling said in an email. She ignored follow-up questions about whether Rice was still employed.

The resignation comes roughly two weeks after the agency’s internal watchdog concluded that poor Interior Department staff record keeping made it impossible to determine if the reassignment of dozens of senior agency staff last year was legal.

When Zinke announced Rice as his choice to lead the bureau in October, he said the veteran Interior official “has a wealth of management expertise and experience that will well serve Indian Country.”

“I have full confidence that Bryan is the right person at this pivotal time as we work to renew the department’s focus on self-determination and self-governance, give power back to the tribes, and provide real meaning to the concept of tribal sovereignty,” Zinke said.


Rice is a member of the Cherokee Nation of Oklahoma and previously led Interior’s Office of Wildland Fire beginning under the Obama administration in 2016.
Posted by OPechanga at 12:53 PM

I heard that Mark Macarro has applied for this job also.
I really hope that they flushed his application down the toilet like he has done to the applications for enrollment in the Pachanga tribe.

Why would he apply for a job that pays about a third of what he makes and controls now?

Would he have to resign his chairmanship??