The BATTLE of the ONEIDA NATIONS: Wisconsin vs. Ray Halbritter's Oneida Indian Nation of NY

The Oneida Nation of Wisconsin said Wednesday says it has filed a petition with the U.S. Patent Office, seeking to stop an attempt by the Ray Halbritter-led  Oneida Indian Nation of New York to trademark certain terms.
According to the Wisconsin tribe, based near Green Bay, it believes both tribes should be able to the phrases "Oneida", "Oneida Indian Nation" and "Oneida Nation." However, it says if the New York-based tribe is successful, that tribe alone could use those terms. 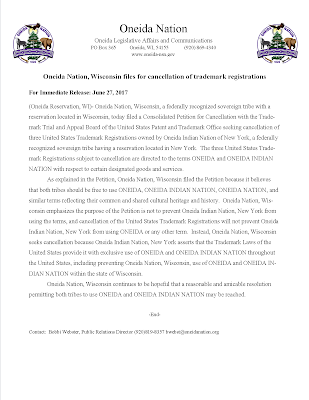 
LET's GET READY TO RUMBLLLLLLE!

Posted by OPechanga at 9:52 AM