In an example of KARMA   Saginaw Chippewa Tribal Council member  Amanda Oldman, 44, of Union Township was charged Friday with one count of obtaining a controlled substance by fraud, a four-year felony.

The MORNING SUN has the story of the illicit dealings.  If she's a law breaker,how can we trust that she's doing the right thing by native people?

With a felony conviction, according to the tribe's constitution  she is to be removed from the council and lose her per capita.

I understand it couldn't happen to nice person
.  According to police, the illegal sale of prescription drugs allegedly took place roughly 10 times between the two women for three weeks prior to her arrest, the officer said in the affidavit.  This begs the question:  Is she competent to make decisions for the tribe? 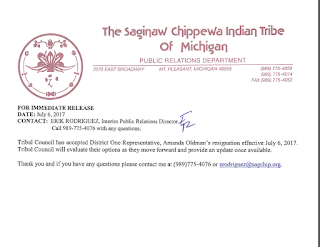 Posted by OPechanga at 1:04 PM

How in the hell does the Chairman down at Pala get away with his drug dealings.
Rumors are that he controls the meth dealings around 3 different Reservations and he says he will not be stopped by anyone not even the FBI can catch him.