Is the Influence of Pechanga's Crime Family Waning? Leivas Descendants Seem to Be Losing Their Grip.

Tribal members have always wondered if Masiel-Basquez were TRUE PECHANGA PEOPLE?  and why did the tribal council allow them to skirt tribal laws, attain council status and thumb their noses at tribal authority?

It seems that Rivera was placed into a position where he could keep an eye ALL Pechanga members and reservation residents movements through his dispatch position.    Dispatch? Well, then one has to wonder why this Megan's Law felon was hanging around the reservation's school?  This asshat was one of the rangers that pulled Hunter descendants from the Pechanga Reservation School .   Then word comes that this guy mooned some people at the Pechanga RV resort, and was fired.   This is not the first time he was fired, but will it be his last? 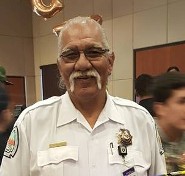 With the recent death of the despicable Raymond Basquez Sr., his uncle, and his relative, Andrew Masiel Sr. no longer on the council, his cousin, Jennie Miranda kicked out of the reservation and only Ray Basquez Jr. running for a seat on the council...there may be nobody to help him.

Does Macarro want to risk his political capital..or rather, his WIFE's political aspirations (re Hillary Clinton advisor) on a guy like Rivera, or to support a felon on his council?   I'd think not, but then a hundred of us thought Macarro would do the right thing by the Hunters and Manuela Miranda descendants.

It's time for the Pechanga people to start standing up.  Get an accounting of what the council is doing...

This guy has always been a disgusting ex-felon. He's been to drug rehab so many times while working as Pechanga Tribal Ranger. Someone on the Tribal Council has always covered for him. We never felt safe here on the Rez with him on the Tribal Police force.

The second generation are in prison or have drug problem's and are not able to run a casino.

I don't think that Holly would make it through the background check to become an advisor to Hilary. And what does this douche care about getting fired, he will still get that huge per cap check.

The Clinton crime syndicate would love to have them.

I'd hope for years this would happen. With examples like Ron hanging around the Rez school as the kids come and go is obvious how mindless there treatment of people.

I saw what he did with his pants down when he posted it on Facebook before they took it down. It was So Disgusting! Shouldn't that count for Jail Time when your a sex offender???

Oi leave the man alone!! He is a good man, Yes he has done mistakes but haven't we all? I mean come on he cares about the rez. We all do so back off!! Make sure your closet is spot clean before you judge other people. I dont know about whatever he did with the facebook thing but think about what he HAS done FOR pechanga.