The Criminal Section of the U.S Dept of Justice ( Civil rights Division ) is reviewing their first " Hate Crime Case " regarding the Pechanga Tribal Council according to a letter received.  The plaintiff or Victim  in this matter "Joe Liska " filed a law suit and complaint two years ago . 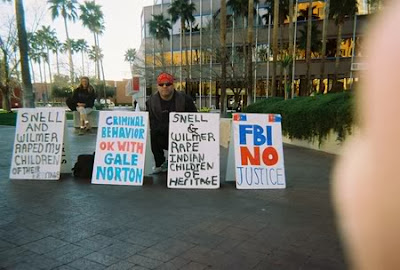 The Victim seen here protesting in Downtown Tucson " In front on the FBI office" got mad because he was Banished by ( Adopted tribal Council members) and he was told he could not pray at his fathers Gravesite on the Pechanga Indian Reservation in Temecula California.
The Adopted members hired " Snell and Wilmer Law Firm " to Destroy him in Court " Joe Liska ( Was defending himself "pro se " ).
So Mr. Liska got his signs and went outside " Snell and Wilmers Law Firm " to let them no how he felt about them destroying his children's Heritage. Joe Liska sat outside their Office on his days off from his job " For 4 months ".
Mr. Liska was Finally forced  off the street corner but will not comment ( Because of a pending law suit ) .
The Criminal Section Reviews :
Hate Crimes .
Force or threats intended to interfere with religious activities because of their religious nature.
Posted by OPechanga at 11:25 AM

Tosobols were BANISHED for picking sage on their own PROPERTY. Wouldn't that be a hate crime too? Especially with white man Butch Murphy on the council?

Yes ,go to their website and file an online " Complaint ". That's what was done in this case two years ago along with a Law Suit.

The DOJ Criminal section "Trumps " all agencies Federal or State and they have they Lead in this matter.

This is not a Civil matter but a Criminal Issue ( Before the Criminal Division).

I hope it works out Joe. You know I stand with you brother.

Sovereignty is not immunity to civil rights.

Hate crime is the violence of intolerance and bigotry, intended to hurt and intimidate someone because of their race, ethnicity, national origin, religious, sexual orientation, or disability. The purveyors of hate use explosives, arson, weapons, vandalism, physical violence, and verbal threats of violence to instill fear in their victims, leaving them vulnerable to more attacks and feeling alienated, helpless, suspicious and fearful. Others may become frustrated and angry if they believe the local government and other groups in the community will not protect them. When perpetrators of hate are not prosecuted as criminals and their acts not publicly condemned, their crimes can weaken even those communities with the healthiest race relations.


Among the known perpetrators, 66 percent were white, and 20 percent were black. Some perpetrators commit hate crimes with their peers as a "thrill" or while under the influence of drugs or alcohol; some as a reaction against a perceived threat or to preserve their "turf'; and some who out of resentment over the growing economic power of a particular racial or ethnic group engage in scapegoating.

You may report possible violations on you own or on behalf of others if they have sufficient first-hand information about the incident. The information provided should include:
◦Names of the victim( s)
◦Any witnesses
◦The perpetrators (if known)
◦A description of the events
◦Whether any physical injuries or physical damage were incurred
Complaints in writing are preferred, but there may be circumstances when a telephone complaint is appropriate (especially if there is an immediate danger). The "blue pages" of your local telephone book should have the phone numbers and addresses for the agencies shown below.

Alright Joe. I stand with you brother. "Eagle Eyes."

Yes, I believe that when members of the Tosobol family were banished after picking sage on their allotment that it is the same thing as what Joe Liska is going through. By the way, Joe is stuck in the moratorium also. So even though this is a Hunter run site who have been disenrolled, we do care about our moratorium brothers and sister. The fact that this article is up shows this is the case.

Here's photo's of Joe being stopped at Pechanga ( Not allowed to pray at fathers grave ).On His Blog maybe you could put them here because they show a (Rios family member ) who got banished also .

So to protest, he sits in front of an office for 4 months on his day off with poorly made signs.

Come on. How many hours were wasted? He could have spent the time organizing a movement instead.

You disenrolled understand that there will be no better time than NOW to do something about this, right? Democrats controlling the country from top down, and here, you have a face of the disenrolled at Pechanga, and he sits with signs that are laughable at best, for hours and hours, making a silent statement to people that don't really care. Stop being lazy, and take real action. Learn something about community organizing. So much power to be collectively pooled, yet still, none of you are doing it. I am not one of you, but I am so tempted to do what you obviously are too scared to do.
I suggest that you read up on the civil rights March on Washington and how it was organized. They didn't know how to start, they just DID it. That's my challenge to you. A million disenrolled march on Pechanga.

Here, my friends, let me help you:

once you learn how to organize, create a nonprofit alliance, call, call, call, social media, and bus people in from around the country.

Make this happen before it is too late. Get arrested by the hundreds while marching onto the Pechanga Reservation.

You won't be ignored anymore.

Never Let Anyone Define You , Never let yourself be bullied into silence. Don't let anyone define you, define yourself.

If you have to go to a website to get "kick started " you already lost !

Bashing, and bigotry toward moratorium people is a "Hate Crime "!

For 19.95 you could buy my kickstarter video : I will teach you the 10 step program to be somebody.

Kickstarter .com You need to work on your " leadership and motivational skills".

Your attack on the above protester or belief, or opinion that differs from your own is the state of mind of a bigot.

Oliver Wendell Holmes, Sr. described bigotry in the following quotation: "The mind of a bigot is like the pupil of the eye; the more light you pour upon it, the more it will contract."

I checked out your website and its full of ( Young students ).

When the student is ready the master will appear.

Joe also has brought Pechanga into court maybe, at least yet, he doesn't have the victories but he is doing what he can to right these injustices. So instead of putting down his efforts, you should be supporting his efforts and giving encouragement. That is if you really do care, which I have doubts about.

The whole story is pretty corrupt and Sick about some " Pechanga Tribal Council Members ".

What would make some people stop someone from " praying at their fathers Grave"?

They must be " Demented" Mentally ill; or insane ?

Maybe Christ manifestation or the Tribal Council Believes that they are what are commonly called prophets.

The tribal council would not believe what prophets say only what profits say!

They are profits ! And the tribes profits got them in trouble.

"The tribal council would not believe what prophets say only what profits say!"

Now that is funny, but true.