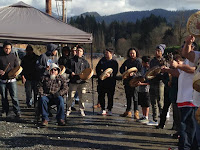 “I’ve been doing the math and it just doesn’t make sense to me,” said Robert Doucette, who ran on a slate promising change in a tribe riven by bitter division over a long-running disenrollment effort.

Seattle attorney Gabriel Galanda, who has long represented those facing disenrollment, attracting national attention, has now taken on Doucette and other members of his slate as clients. On Monday, Galanda filed a challenge to the results with the tribal election board. He said he also plans to lodge a protest with the Bureau of Indian Affairs (BIA).

OP:  The BIA doesn't care.  They just wanted ANY ELECTION as COVER...

Kelly and aligned council members sought to kick out roughly 300 members in a dispute over lineage and power, the tribal government stopped tending to other matters and resorted to unusual means to enforce its will. It fired a judge for opinions it didn’t like, disbarred Galanda and called off an election that was supposed to be held in 2015.

With some Nooksack council members holding onto power after their terms had expired, the feds deemed the tribal government illegitimate and denied the tribe millions in federal funds. The election was a prerequisite for getting that funding back.
READ THE REST of the story HERE
Posted by OPechanga at 9:50 AM