With the backdrop of Andrew "Indian Killer" Jackson, President Donald Trump spoils the day of honor for Navajo code talkers

Just stick to the script Mr. President.  It's true, that Elizabeth Warren is a WANNABE and a heritage thief. Readers can find her detailed genealogy done by Twila Barnes who writes Thoughts From Polly's Granddaughter blog, but disparaging a REAL Native, Pocahontas, and using her name in a derogatory manner, IS CULTURALLY insensitive. 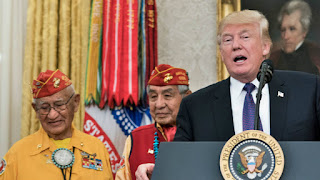 Yes, the code talkers of World War II day of honor was disgraced, and here's part of the statement by Navajo President Begaye:
“In this day and age, all tribal nations still battle insensitive references to our people. The prejudice that Native American people face is an unfortunate historical legacy,” President Begaye said. “As Native Americans, we are proud people who have taken care of this land long before there was the United States of America and we will continue to fight for this Nation.”
President Begaye said the Navajo Nation does not want to engage in this dialogue between Sen. Warren and President Trump.
The purpose of the day’s event was to honor all Native American Code Talkers who used their native languages to encode sensitive messages and protect U.S. wartime communications in both World Wars I and II.
“It was our Code Talkers that ensured the freedom of the United States and that’s what is important to remember here,” President Begaye said.

Posted by OPechanga at 2:56 PM

It was disrespectful of Trump to drag his feud with Warren into that ceremony, especially since Dine` elderlies had traveled to the ceremony to honor their people. Maybe Trump was more respectful of those present when he signed the bill recognizing six Virginia tribes as federally listed tribes. I don't know because I didn't see a lot about it in the news when he signed the bill.