He died Sunday at Hemet Valley Medical Center after years of suffering from diabetes and other illnesses. He was 73. 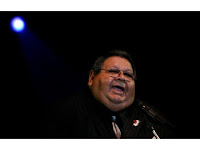 Death came five years after the former high school and college football star-turned-tribal powerhouse was sentenced to nearly 3 1/2 years federal imprisonment for accepting almost $865,000 in kickbacks from vendors in exchange for giving them contracts on the San Jacinto-area reservation and its Soboba Casino.

Salgado's indictment was a blow to the tribe, which he had led on and off for more than three decades, and to Salgado's large and well-known family.
"He did his time, and he came home," sister Rose Salgado said late Sunday. "We just left the hospital, and I don't want to speak right now. It just seems ... so surreal."
Posted by OPechanga at 10:53 AM

Rest in peace Bobby, and Robert Smith will be joining you soon.
He is also sick with his diabetes, and corruption.
And it is catching up to him.
Watching him die a slow death is some what justice. However it would be nice to know that he faced up to what he did and make every thing good again, but he is to stupid for that.