Ending Birthright Citizenship? DOZENS of TRIBES Have DONE JUST THAT

NYTIMES Breaking News: President Trump said he was preparing an executive order to end birthright citizenship. It is unclear whether he can do so unilaterally. 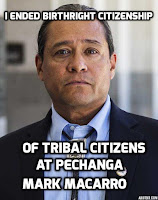 GalandaBroadman: 80 groups of tribal politicians have already done this in Indian Country. BOOM!

We've reported that over 11,000 Native Americans have had their tribal citizenship ripped from them, and YES, most were birthright citizenship going back CENTURIES.  Here is a partial list of those tribes who have ended birthrights.

WHY don't NATIVE LIVES MATTER when it comes to BIRTHRIGHT CITZENSHIP?  Why do the DEMOCRATS not care about Natives, except for their casino dollars..
Learn More on Disenrollment, Ethnic Cleansing in Indian Gaming Country at these Links:

According to Mark and others who agree, it’s ok to strip others rights even after our elders had their rights taken. Families who have been stripped of their tribal rights is ok? It’s sad when our ancestors recognized band members in recorded history, band members today can ignore ithat our elders recorded depositions on who is Pechanga.

Why would Pechanga people ignore or strip others of their rights, even if the records are crystal clear?

If our Ancestors went through the uncomfortable actions of others, some believe it’s ok to do it again. This time strip others of their rights because we can in our own family!

That first comment was hilarious!But true, what the hell happened to that Mark in that picture! Wow~Aids!...And yes, those that were disenrolled have Crytsal clear documents that they belong to the tribe..And I must add as the economy gets worse...The High democracy will find ways to bend the Native Americans again..All to take our Funds lands and citizen ship ..BEWARE!....pray for our people.

Stripping others rights is ok with Macarro et al. Macarro only honors what he wants or believes, I'm sure that is custom and tradition?!

Galanda Broadman takes any chance to swipe at the President, its purely his platform for political opinion. Sad.