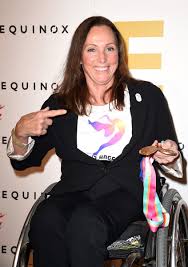 A bit out of the usual storyline from our blog, but I've got an opportunity to help a friend and ask for your help too. She's auditioning for a show on the Oprah Winfrey network and you can help her by viewing the video: CANDACE'S Audition and voting for her audition tape.


Disaster invaded Candace Cable's life in 1975 when she suffered a spinal cord injury in an automobile accident. At the age of 21, she would never walk again. However, out of this tragic circumstance emerged a woman with the character and will to become one of today's most successful world athletes.

Candace Cable has been ranked number one nationally in wheelchair racing competition from 1984 to 1990. Furthermore, internationally, she has won 75 marathons, including six Boston Marathons (1981, '82, '85, '86, '87, & '88) and has set world records in every distance throughout her 21-year career. Winning two Olympic medals in three Summer Olympic Games, Candace participated in the only exhibition event for the disabled. Additionally, she has won nine Gold medals in five Summer Paralympic Games. Since 1990, Candace has been competing on the United States Disabled Ski Team, winning three Paralympic medals on the Alpine team. In 1994, she switched to the Cross Country Team, and is currently on the "A" team.

Now, this is overcoming adversity. Please help Candace continue her success, she's just back from meeting with President Obama, he's the third President that has asked to meet her. She's available, I believe for speaking events, check THIS LINK

UPDATE:  Her  HALL OF FAME BIO

Candace Cable has been an integral voice in adaptive sport, both through her athletic and post-athletic career. She was the first American woman to win medals in both the Summer and Winter Paralympic Games. After debuting on the Paralympic stage at Arnhem 1980, she went on to earn 12 medals over the course of her career, including eight golds. After competing in exhibition events in the first-ever Olympic wheelchair racing event in 1984 in Los Angeles, Cable competed at the 1988, 1992 and 1996 Games, as well as at five editions of the Paralympic Winter Games in the alpine and Nordic ski racing events. She is a nine-time Paralympian who competed in three sports: track and field, alpine skiing and Nordic skiing. She also had the opportunity to compete on an Olympic stage, when wheelchair racing was an exhibition event, in 1984, 1988 and 1992 and won two bronze medals. Cable’s athletic career includes 84 first-place finishes at various marathons around the world. She has demonstrated a continued commitment to the future of sport, including at the time of her Hall of Fame induction, serving as the vice chair for LA 2028 and consulting with various groups across the world to create a more inclusive environments for those with disabilities.
Posted by OPechanga at 4:34 PM

Intriguing story. We voted after watching.