Native Americans had NO CULTURE, says CNN analyst RICK SANDTORUM.    What a fucking moron. He should be beaten with a Lacrosse stick. Here's the text and you can find the video here

Our culture was wiped out, by his ancestors.  OUR right to practices OUR religion, OUR beliefs was wiped out by Europeans and replaced by HIS ancestors.

YES, he has freedom of speech and YES he should be fired for his racist comments.   Who would want to walk a mile in his moccasins right now?   CNN the ball is in your court.  Send him to be with no fry bread. 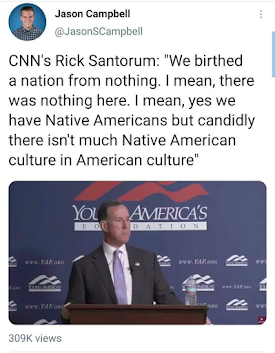 The confederation of the original 13 colonies into one republic was inﬂuenced by the political system developed by the Iroquois Confederacy, as were many of the democratic principles which were incorporated into the constitution itself."

The peoples of the Iroquois Confederacy, also known as the Six Nations, refer to themselves as the Haudenosaunee, (pronounced "hoo-dee-noh-SHAW-nee"). It means “peoples of the longhouse,” and refers to their lengthy bark-covered longhouses that housed many families. Theirs was a sophisticated and thriving society of well over 5,000 people when the ﬁrst European explorers encountered them in the early seventeenth century.

Posted by OPechanga at 4:28 PM

This RICK DICK should be Lynched mobbed and decapitated~ He's a straight idiot and should be exterminated. If we allow these type of ass holes, to speak upon us"firs Born, your going to have the KKK next on our parade.

He's a idiot, And I should not write this or expose this. But native Americans have Alien blood. Yes. Many of our people have Ancient Blood. A fact that Yehsua Jesus Christ also has Alien blood.

Claiming alien blood without support is just as disturbing as a talking head like Rick Santorum disregarding the value of Native American culture in the building of the United States. Always consider the source when such ridiculous comments are brought forth. Measuring the impact of tribal nations over centuries would require a huge effort. Spouting off an unsupported opinion only takes a few moments, but does leave a very bad odor behind.