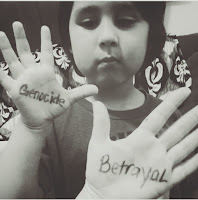 The visual advocacy movement is a grassroots Native reaction to tribal politicians who have, over the last decade, exiled thousands of their own relatives from tribal communities and homelands, through a colonially inspired practice called “disenrollment.”
Disenrollment is NOT the Indian Way

Disenrollment is happening because of money, control of power and to settle old scores, as well as some quid pro quo...

Posted by OPechanga at 4:34 AM

2018. Sarrisland & the Ides of March: Motion to the Court of Public Opinion
My fate is in the hands of the General Council on April 14, 2018. I have been extremely provoked for fifteen (15) years of Sarris's unconscionable vendetta and abuses. Tribal members fear they or their family member will be targeted as evidenced by my daughter was threatened which is why I chose to take my case to the Court of Public Opinion in the first place. Without (ICRA) Indian Civil Rights Act protections, tribal members are not safe. The Bureau of Indian Affairs (BIA) is not a judiciary and are not equipped to handle these matters.

2012 From the first letter to the Court of Public Opinion
When will I stop being cheated. When questioned by the 9th Circuit Court, the Chairman said he made a mistake. The Chairman is highly educated, knew what he was doing, acted with malice and forethought but he testified he made a mistake so let's go with that. As far as mistakes go this was a dozy, it caught the attention of the 9th Circuit Court. The Chairman never apologized to me; as a matter of fact subsequent to being ousted from my duly elected Office of Tribal Secretary I complained and received a 3 to 5 year disciplinary sanction. I have already served more than eight (8) years on this sentence. The Chairman is the leader of a sovereign people, a small group of 1300+ persons, many elderly and children. When will I stop being cheated?

2014 first public notice, motion to the court filed on Craigslist

2015 second motion to court of public opinion and received first written threat my fighting for my rights is to be considered harassment.

20 16 third motion to court of public, noticed one letter a year is harassment.

2017 fourth motion to court of public opinion, charged with harassment.

Hold Chairman Greg Sarris accountable for maliciously abusing his power/office to engage in a fifteen (15) year unconscionable personal vendetta, for surreptitiously avoiding accountability and placing blame on others, for Gross Malfeasance. Sarris in essence raped/violated me and used the threat of being so raped/violated as leverage to keep others in line.


Please pray for Lorelle Ross and Gene Buvelot to give them the support, insight and strength of character to stand make and second a motion I not be kicked out again.
Thank you